Gyps Indicus commonly known as the Indian Vulture is an old world vulture found mostly in India, Pakistan and Nepal. This bird is bulky and has pale covert feathers and darker quills. It weighs 5.5-6.3 kgs, 80-103 cms long and has a wingspan of 196-238 cms. It is a scavenger and mostly feed on carcasses of dead animals. It has been  listed as critically endangered on the IUCN Red List since the year 2002. 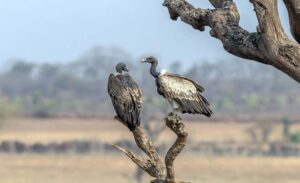 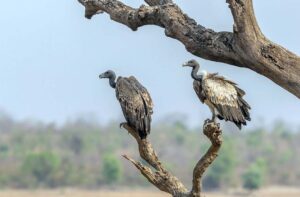 In the Indian context, the loss of habitat and diclofenac, painkiller used to treat sick cattle is the main reason why vultures belong to IUCN RedList for more than last two decades. Impact of this drug on vultures continued to be devastating in spite of the ban imposed by Govt. of India since 2006 for cattle usage. The diclofenac drug usually harms kidney causing the death. Railway line passing nearby the sanctuary area causes damage some times during the winter months. Lower visibility due to heavy fog cause accidental death of stray cattle on which come vultures to feed and meet with the same fate.
Vultures play a unique role in the ecosystem. They are critical in keeping the countryside clean by scavenging the carcasses which might spread infectious diseases. Their strong stomach acids help them to consume rotting corpses. These corpses are often infected with anthrax, botulinum toxins and rabbies that are fatally infectious among other animal communities. 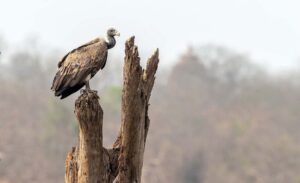 Vultures are usually not very well thought of, but they do play an important role in ecosystem by consuming carcasses. They are nature’s own cleaning devices. The decrease in their population has given rise to several diseases such as rabbies, unhygienic environment and infections to poultry, birds & avians and also humans. 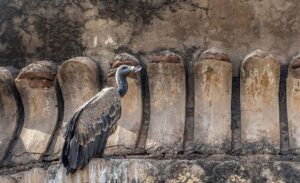 Special Thanks to Dr. Jitu Solanki
He is working on the conservation of these magnificent birds since long.