The demoiselle cranes (scientifically called GUS VIRGO) also known as the KOONJ bird in local north Indian language is the species of cranes, generally found in central Eurasia, Mongolia and North-Eastern China. These migratory birds from Mongolia and china spend their winter in north-western India in the desert lands of Rajasthan and some parts of Gujarat. The Queen Marie Antoinette of France named them Demoiselle which means maiden or young lady, because of their delicate and eye-catching appearance. 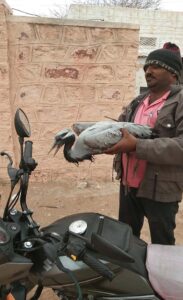 These cranes are little smaller than the common cranes but has almost equal plumage. They’re believed to be the smallest species of cranes. They’re 85-100 cm in length, 76cm tall and has blue and gray plumage that contrasts w their black legs and eyes.

Culturally, these birds are figured prominently in the literature of the North-Indian region.  The beauty of a woman is often compared to that of KOONJ birds because of their thin and long neck which is considered graceful.  People who’ve ventured far from their home or who’ve taken hazardous journeys are often metaphorically referred as KOONJ because these cranes make one of the toughest migrations in the world by crossing the Himalayas for a stretch of almost 8 kms at an altitude upto 26,000 ft to reach to the deserted lands of Khichan. Their immense blood-thinning capability and to be able to regulate the blood flow and supply oxygen to their brains on the high altitude during their flight over Himalaya makes these birds stand out from the rest of the species. 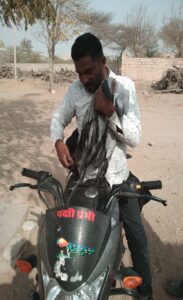 Demoiselle cranes lives in a variety of different environments which includes desert areas and numerous types of grasslands which are often within a few hundred metres of streams or lakes.  In late August through September, they gather in flocks of up to 400 individuals and prepare for their flight to their winter range. 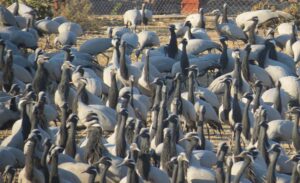 Khichan village in Rajasthan is located in the Phalodi Tehsil of Jodhpur District. The village is known for a large number of demoiselle cranes that visit it every winter and has become an accidental conservation. Khichan hosts over 2000-8000 demoiselle cranes from as early as August each year to as late as March of the following year. This annual bird migration began with around a hundred cranes in the 1970s which now has increased to several thousand of birds migrating every year. Any bird-watching tour to Rajasthan is incomplete without a glimpse of Khichan’s winged royalty feeding right in the midst of the human settlement.

Now the question is, is it just the free food that brings the birds to khichan? According to scientists, khichan does have some special features. It lies in a semi-arid region and has large areas of empty land and sand dunes around it which provides open space which cranes need for wintering.  They also eat small pebbles which are accretion of gypsum that provides them calcium which they require to digest the food. Other experts point out that in this vast desert region there are also many other places with similar advantages. But nowhere else do cranes settle in such huge numbers. So it is the traditional hospitality of the people Like Mr. Sevaram Malli Parihar and the feeling of security the birds get which gives this village the edge and makes it the best example of the accidental conservation.

END_OF_DOCUMENT_TOKEN_TO_BE_REPLACED

2 thoughts on “Demoiselle Cranes (Khichan – Example of the Accidental Conservation)”