When we talk about endangered animal species, the major species of animals such as lions, tigers, etc come to our minds; but rarely do we think of a Wild dog. The Asiatic Wild Dog (Dhole) is one such species of Wild dog that is listed endangered by IUCN with an estimate of almost less than 2500 dogs left in the world. 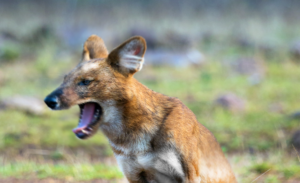 Dholes are scientifically known by their Latin name Cuon Alpinus. They are known by several names in English including Asiatic wild dog, Indian wild dog, whistling dog, and red dog. the adult male dhole weighs about 15kg-21kg whereas the adult female dhole weighs about 10kg-17kg. A dhole stands 17-21in at the shoulder and measures 3ft in body length.

One of the unique physical characteristics of dhole is that their forehead is convex. These dogs are characterized by reddish-brown fur with white or light-colored necks, chests, and undersides. Their tails are black and bushy.

However, different color variations occur, particularly for those subspecies living in the alpine steppes. Dholes have teeth unlike those of other species of wild dogs, most of which have 42. The Indian wild dog is missing one pair of lower molars, and their upper molars only have one cusp.

These Wild Dogs are very social and live in a group of up to 20 to 30. But only Alpha males & Females have Rights to matte. These dogs have quite a few natural predators. The list includes large cats such as tigers and leopards that are roaming in the same hunting grounds. Humans are by far the major threat to dholes in India.

Habitat loss due to the expansion of human settlement is a major issue. Deforestation is another main reason for the loss of major wildlife habitat. The missing habitat also includes gaur, deer, and wild boar which are dhole’s natural prey. Due to the decreasing number of prey populations, these animals are forced to look upon the other sources of food because of which they come in direct conflict with farmers who sometimes actively tries to kill them even though it is illegal to kill dhole since 1970.

In India, these wild dogs are majorly found in the region Madhya Pradesh, Kerela, Karnataka & Maharashtra. The Nagarhole National Park in Mysore district of Karnataka which is a part of Nilgiri Reserve has a healthy predator-prey ratio with Dhole (Asiatic Wild Dogs).

Scientists say that Indian Wild Dogs play a significant role in the ecosystems of their prevailing habitats. These species are not as well known as tigers or leopards but are equally critical from an environmental standpoint. Without them, the forests of Asia would cave-in and their repercussions are unimaginable.

Every animal fits an ecological sequence and fills a biological niche to maintain the balance in the ecosystem and hence the ideal situation would be that we, as humans, collectively value all of the world’s animals equally. And we should pay particular attention to those animals that are featured on the endangered species list.