Across the most populated desert of the world fondly known as Thar desert situated in Rajasthan India resides a bird named Great Indian Bustard. Desert National Park of Thar is approximately covering 3162 square kilometers. Local name of this bird is ‘Godawan’ there and is known as ‘Ghorad’ in Kutch, Gujarat. Bustard in french means slow, which gives an overview it’s a slow bird and it truly is. 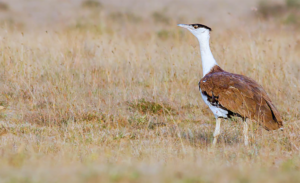 These bustard’s are 3 feet in height with a wingspan of 6-8 feet and do weigh 15-18 kilograms. Bustard’s are facing life threats on a mammoth scale owing to change in habitat. Majorly they are facing a threat from the wind turbines and power lines. Their population has shrunk to just 10% over  the last decade, their frontal vision being non existential they are majorly hit during flying by power lines and wind turbines as they don’t expect any hurdles in the sky.

The Males enjoy solitude during mating and form small flocks in winters. They mate during March to September. Males flaunt their feathers to attract females, well male birds are fond of dancing to attract females and captivate their attention by out showing their feathers most of the times. Females lay a single egg at a time and are the ones to incubate the egg and take care of the young ones. Their go to meal is insects, beetles, rodents, lizards and, occasionally, even small snakes. They are also known to feed on grass seeds and berries etc. When threatened, female birds carry young chicks under their wings. They can be spotted in open grasslands, usually arid and semi-arid areas with thorn scrubs. Bustards are fondly known as farmers best friend. Their long white neck and beautiful sturdy outlooks help farmers to keep intruders away from their crop.

The total population of the bird across India was 1000 in year 1969, about 300 during the year 2008, out of which only about 250 were left by 2011. It has been recently reported to just 150 recently which clearly is a sign of their extinction. Its a challenge to revive the population of these ones by wildlife conservatories.  Rajasthan and Gujarat are doing its needful to save these birds and inflate their population by setting up breeding centers for the Bustards.

Thanks to a collaboration between Wild Life Institute of India and Rajasthan who have been setting up a breeding center in Sam, Jaisalmer, Rajasthan to revive these birds. The local quarters there have been transformed into conservation center. Scientist from IFHC (International Fund for Houbara Conservation), Abu Dhabi have helped in setting this center and also designed it. They incubate eggs here which are conserved from wild and monitor their hatching under specific temperature required for hatching. The conservation area is protected completely to protect eggs from dogs and foxes. Post hatching the newborns are taken care upto 10 months or a year depending on their growth. Their feeding is taken care of precisely during their upbringing.

With immense field work by the experts of IFHC who trace the females that are to lay eggs, the team there has collected 7 eggs with permission from Rajasthan government and they have a stupendous record of 100% success in hatching all 7 eggs. Post collecting the egg, its transported in a chamber and the commute is taken care of being non jerky one. Post arriving at center its treated antiseptically to get rid off all germs. Post weighing the egg they find the development stage of embryo and leave it in incubator for further upbringing that is monitored under a fixed temperature and humidity for the egg to lose its moisture. Post hearing the cracking sound for hatching its again shifted to another chamber for a perfect hatch. The chics are then fed with live diet and also grains that are passed by Hobara standards for high protein diet that Bustards need for a healthy growth. Growth parameters and weight are under constant observation. The chics even exercise my having a walk in protected sand fields. They need long walks for their limbs to be perfectly fit. They are trained to human presence by massaging and being friendly so that they can be vaccinated and medicated with ease. Also they shall be kept in conservation center for further breeding. With such an incredible effort we wish that Sam Conservatory helps in reviving the population of these birds.

4 thoughts on “Great Indian Bustard – A localite of India”