India is a beautiful land. Home to more wildlife we than we can imagine and around 60% of the world’s population of tigers. India  recently witnessed a significant population increase and that means humans and tigers have been forced into closer proximity than ever before, resulting in conflict and losses for both sides.

Famously and controversially the tiger was known as T-1 who was killed after a two year hunt as she had apparently killed 13 people and was viewed as a danger. Her hunt was sanctioned by the Indian government who paid for hunters to go after her. They successfully tranquilised her but claimed she woke up and attacked them resulting in her being shot. Other politicians claimed this was  “nothing but a straight case of crime” . PETA was particularly vocal about the lack of any veterinarian being present who could have effectively tranquilised the animal. Another tiger was killed inside the Uttar Pradesh wildlife reserve which means it is a crime under the Wildlife Protection act, though killing a tiger is illegal in any case. These two deaths happened within days of each other and reopened the debate on humans and tigers. 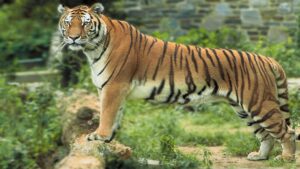 There have been numerous cases of  tiger hunts which is a shame as it overshadows what is a national conservation success, tiger numbers have risen from 1800 to 2226 between 2010 and 2014. WWF India say it is unsurprising that conflict is occurring as the boundary between humans and wildlife was “Blurring by the day” as humans continue to encroach on tiger habitat.

The issue is deeper than this though, it is a social stigma and a fear. Whilst it is perfectly reasonable to be afraid of a tiger we have to realise that tigers kill far fewer people than elephants.In terms of most deadly animals in India tigers are not at the top of the list but are treated as monsters. The wellbeing of animals is linked to the people and policies need to be enacted that benefit both people and animals. Tigers are being killed as people fear them and feel they are not being protected by their governing bodies.

It is not a new issue, at least 800 people were killed in 1877 in British ruled India but now India has so few forests that the tigers are pushed into ever smaller areas.In some cases totally encircled by humans. Tigers live in a very small area and they conflict with each other for food and many are forced to wander further and find new sources of food which brings them into conflict with farmers and villagers. Often there is a lack of any infrastructure, fences and barriers are not constructed and there is nothing to stop tigers wandering into villages. Blaming the tigers is not the answer as this is a problem entirely of human making.

Poachers too are still rife, often killing tigers and bribing locals to set traps and support them. In many rural areas there are no career options for people and so they turn to poaching because of a lack of other options. Lack of development, lack of infrastructure and lack of governance are the cause of this tiger issue. In some areas though things are changing.

Wildlife tourism is on the increase in India with many now seeing the financial value their wildlife brings in the form of tourism. Once people realise that animals are worth more alive than dead we start to change the relationship between people and animals. We no longer conflict, instead we rely on them. A single tour operator, such as Travish for example, is responsible for hiring local guides, local drivers and increasing demand for hotels. Furthermore the forests then become protected with more guards and officials than before which drives down poaching and provides local people with an abundance of jobs and a respect for the wildlife. A single successful tour company can easily provide hundreds of jobs and change the entire area for the better.

In the end, education and awareness about the risks and reasons is the way this conflict will end. We need to understand why the tigers act as they do, not out of an innate monstrous nature but out of their will to survive and feed their families. If we can respect the value they bring and give them space to be wild it is perfectly possible for humans and tigers to live together peacefully.