The social media has been on uproar due to an elephant that was pregnant died in Kerela on May 27, 2020, standing in water in the Pallakad district after she consumed a pineapple stuffed with crackers. The incident came into light when a forest officer narrated the incident on internet. The word has it that the elephant had left the forests of Silent Valley in Pallakad district into a nearby village in search of food. The cracker explosion was so powerful that it ended up injuring elephant’s mouth and tongue pretty badly. The elephant walked around the town in extreme pain and hunger and was unable to eat anything. According to a note written by Mr. Krishnan, the elephant did not harm any human nor did it crush any single home. The elephant eventually walked up to Velliyar River and stood there with its mouth and trunk in water in order to soothe unbearable pain. After hours of attempts to rescue the elephant out of the river, it eventually died at around 4 pm on May 27th while standing in the river. 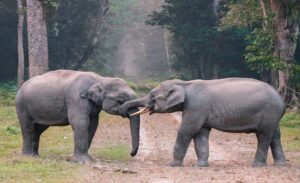 Pineapples stuffed with crackers are used by locals as a snare for catching wild boars. However, a lot of reports suggest that this is an inhuman way to tackle the boar situation and doesn’t justify the ‘accidental’ killing of the elephant or let alone any animal. While the system is looking int the matter, the incident has created a nationwide uproar and many have shared artworks to pay the tribute following the uproar. The incident has also taken a communal color.